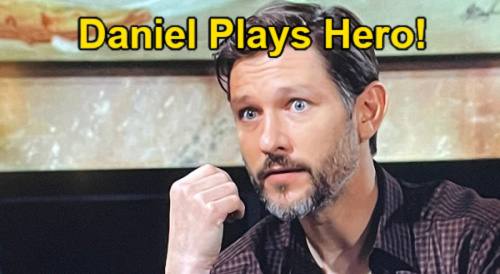 Daniel has done his research and seems to know an awful lot about Chancellor-Winters.

There’s a chance Daniel is working for the enemy, but let’s give him the benefit of the doubt for a moment.

After all, Y&R may want Daniel to be the opposite of Billy Abbott (Jason Thompson), who’s disappointing Lily at every turn.

It feels like they’re bringing Daniel in as this breath of fresh air and another romantic option – someone who can ultimately give Lily the attention she deserves.

Daniel and Lily reconnected like no time had passed, so it’ll be easy to build on their familiar attraction.

These two could be spending a lot more time together if Daniel ends up working with Chancellor-Winters like he wants.

If the show wants to keep Daniel as one of the good guys, maybe they’ll let Daniel play the hero in the next round of Tucker trouble.

Tucker admitted he wants to turn brother against sister since that’s the only way his takeover plan stands a chance of succeeding.

There’s still the potential for Tucker to salvage his scheme, but none of his hard work will matter if he can’t get Devon on board.

Devon and Tucker have to merge their shares if a takeover’s going to happen, but that’d be a big betrayal from Lily’s perspective.

Lily previously told Audra Charles (Zuleyka Silver) that she trusted Devon completely, but that trust may be misplaced.

Perhaps Daniel will end up in the prime position to expose what Devon and Tucker are eventually up to.

Daniel might expose Audra as a mole too and stop this whole takeover plot in the nick of time.

That’d be a great way to pull Lily even further in Daniel’s direction and give him a nice heroic angle to work with.

The Young and the Restless spoilers say Daniel and Lily seem poised to get back together down the road, so she may fall for her hero all over again!

The Young and the Restless